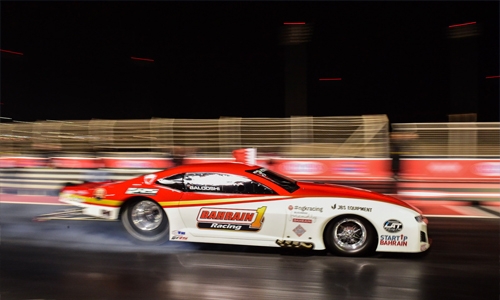 Bahrain International Circuit (BIC), “The Home of Motorsport in the Middle East”, is hosting a crucial week in the national racing season with two of the Kingdom’s biggest championships heating up the tarmac at the world-class Sakhir facility.

The penultimate rounds of both the 2021 Bahrain Drag Racing Championship and the 2020/2021 BIC 2,000cc Challenge are being held at the BIC, and the intensity is set to go up a notch.

Drag racers from all across the Gulf are set for high-octane battles down BIC’s quarter-mile drag strip, with even more on the line as the season nears its climax.

The meeting has already gotten underway with two nights of Test and Tune on Tuesday and Wednesday, while Qualifying followed last night.

That will determine the match-ups in the various categories’ elimination brackets for Race Day today.

With only the fifth and final round remaining after this weekend, the races for the coveted titles in each class remain tight and are headed for an exciting finish.

Hamdan Alkaabi ls the leader in the Index 9.0 class with 1,030 points, while Obaid Al Balooshi tops the Competition 4.5 category with 731 points. Amongst the bikers, Yusuf Hilal boasts 526 points atop the Super Street Bike standings, Fadi Abu Jamus is setting the pace amongst the Street Fight Bikes with 1,092 points, and Ali Bahram leads the Index 8.5 Bike class with 998 points.

Meanwhile, the BIC 2,000cc Challenge stages the sixth of its season’s seven rounds today. Competitors will be racing along BIC’s 2.554-kilometre Inner Track and the action will get underway at 10.05 am with a 30-minute Practice.

Qualifying follows at 11.15 am, which will set the grid for the weekend’s first 12-lap race starting at 12.43 pm. Race two will then be held at 2.13 pm. Podium ceremonies will follow each sprint.

Raed Raffii (Honda S2000) will be looking to cement his hold of the season title this round as he currently leads the championship standings with 214 points.

Raffii is ahead by 57 points from the closest challenger and former champion Tareq Al Tajer (Ford Focus, 157 points).

Both drivers are competing in the Pro class, where Raed Himmo is placed third with 117 points.

Leading the hotly contested Novice class is the driver Martyna Al Qassab (Acura DC5). She has 133 points but is closely followed by Andreas Buelow (Honda Civic) with 120 points.

This weekend’s events have been organised by BIC in cooperation with the Bahrain Motor Federation, the Bahrain Drag Racing Club and the Circuit Racing Club.

All the proceedings are being held with strict health protection measures in place, in line with government regulations and guidance.