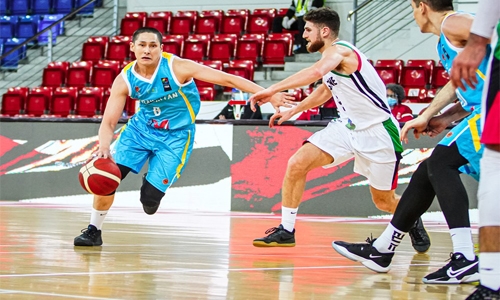 Kazakhstan defeated Palestine 93-56 yesterday to power to their second successive victory in as many days, in the third window of qualifiers being held in Bahrain for the FIBA Asia Cup 2021.

The Kazakhs used a dominant second half where they outscored their opponents 52- 25 to turn a somewhat closely contested affair into a blowout.

They led by just two, 20-18, at the end of the first quarter and then extended their advantage to 41-31 at the half. But in the third, they widened that gap even further and headed into the final canto up 64-40.

They continued to pile it on and enjoyed their biggest lead of the contest of 43 points just seconds before the final whistle. Anthony Clemmons top-scored for the victors with 20 points, while Vadim Chsherbak came off the bench to score 16.

Rustam Murzagaliyev added 15, while Nikolay Bazhin had 12 for Kazakhstan, who had all but one of their 12-man roster make it onto the score sheet.

Kyndall Dykes had 22 markers and 10 rebounds to lead Palestine before fouling out. Star forward Sani Sakakini was held to just 11 points on a tough one of-11 shooting from the field.

Jamal Mayali was their only other man in double-figures with 10 points. The result earned the Kazakhs their third win in four games as they extended their lead atop the standings of qualification Group F. Palestine suffered their second loss in three outings. The action in Bahrain now switches over to Group D this evening, with two games on the schedule.

At 4 pm, India takes on Iraq, to be followed at 7 pm by the host Bahrainis facing off with group leaders Lebanon. Both contests are set to be played at the Khalifa Sports City Arena in Isa Town behind closed doors.