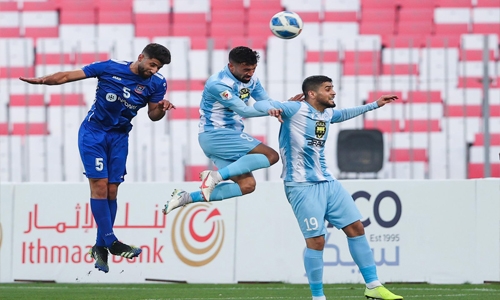 Ali Haram fired in a last gasp winner for Riffa last night in a hard-earned 2-1 victory over Manama in the 2020/2021 Nasser bin Hamad Bahrain Premier Football League. Haram scored in the fifth minute of stoppage time to help the league leaders eke out their ninth win in 10 matches and widen the gap atop the table from their closest challengers.

Mohammed Marhoon had earlier opened the scoring for Riffa but then-teammate Hamad Al Shamsan accidentally sent the ball into his own net to gift Manama an equaliser.

In Riffa’s triumph, all three of the match’s goals came in an eventful second half. Marhoon headed home in the 57th minute off a pin-point cross from the right-wing supplied by Sayed Redha Isa.

Manama was then able to level the proceedings in the 78th minute when Al Shamsan tried to clear a cross by opposing winger Mohammed Adel, but inadvertently directed it into his own net.

Riffa pressed for a winner and they were finally rewarded with just seconds to go before the final whistle. Mahdi Humaidan had the assist with a short lob for an unmarked Haram right in front of the goal, and he made no mistake with his shot as he sent the ball into the left of the net.

Riffa improved to 28 points while Manama suffered their second loss in nine games and stayed on 17 points. In Muharraq’s victory, Al Malood supplied the winner on the stroke of half-time.

A cross from the left by Nigerian professional Prince Aggreh was slightly parried away by East Riffa goalkeeper Hamad Al Dossary, but the ball went straight into the path of Al Malood, who sent the rebound into the goal.

Muharraq claimed only their third win in 10 games as they went to 12 points, while East Riffa suffered their second loss in nine matches and remained second on the table. Meanwhile, Ahl’s win last night was only their third in 10 outings as they improved to 11 points.

Busaiteen suffered their fifth loss and stayed on seven points in second-to-last place. League action continues tonight with just one match on the cards. Budaiya face-off with defending league champions Hidd at 4.45 pm.