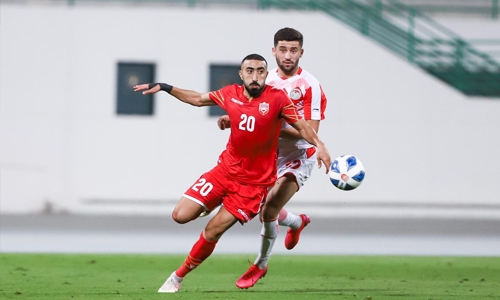 Bahrain’s senior men’s national football team will be playing a pair of international friendly matches next month at home.

The Bahrainis will first take on Syria on March 25, and then face off against Jordan on March 30.

This was announced yesterday by the Bahrain Football Association.

The friendlies are part of the national team’s preparations for their upcoming matches this year.

They will be their first games for 2021.

They last took to the pitch in friendlies during an overseas training camp in Dubai in November of last year.

The Bahrainis will be gathering for the first time this year for local training from tomorrow for a week.

Head coach Helio Sousa and his staff will be supervising the sessions.

Among the key competitions, Bahrain is preparing for is their joint-qualifying campaign for the FIFA World Cup 2022 and AFC Asian Cup 2023.

Bahrain is in Group C of the joint-qualifiers alongside Iraq, Iran, Hong Kong and Cambodia.

They have three games to play against Cambodia, Iran and Hong Kong, all of which are likely to be played in June later this year.