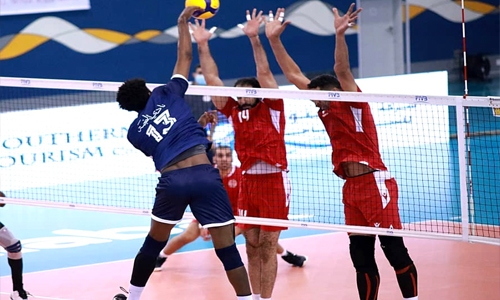 Muharraq barged into the finals of the 2020/2021 Isa bin Rashid Bahrain First Division Volleyball League last night with a resounding 3-1 (25-16, 25-23, 23-25, 25-15) victory over Al Najma in their semi-final clash at the Bahrain Volleyball Association arena at Isa Sports City in Riffa.

The defending champions headed into yesterday’s contest with a twice-to-beat advantage having topped the standings in the league’s preliminary round.

But they eventually proved that it wasn’t needed as they took care of their rivals in convincing fashion to book their return to the championship series.

There they will face Al Ahli in a best-of-three series.

Game one is scheduled to be held on February 25, followed by game two on March 1.

A third fixture, if needed, will be played on March 5. Ahli secured their seats in the finals after beating Dar Kulaib in two games in their final four series, which was held in a best-of-three format.

Muharraq will now be gunning for back-to-back titles and a record 15th in the history of the league.

Ahli, on the other hand, will be hoping to claim their third crown.

Losing semi-finalists Najma and Dar Kulaib will be facing off in a single game to decide third place overall.

This is slated for February 28.

In yesterday’s affair, Muharraq got off to a hot start and took the first set comfortably.

In the second, with the score tied at 23-apiece, a Najma error gave Muharraq the chance to close it out for the 2-0 match advantage, and the reigning champions took full advantage as towering Cameroonian professional Yvan Arthur Kody Bitjaa had a brilliant solo block.

Najma battled back in the third set but Muharraq kept things close.

They managed to do enough to take the two-point win and extend the match into a fourth frame, but their hopes of a comeback were immediately dashed as Muharraq dominated from there until the last ball. Muharraq had timely contributions from their top Bahrain talents including Fadhel Abbas, Mahmood Al Afia, Hussain Haikki, Ali Khairallah, Bader Mohammed and Mohammed Habib, among others.