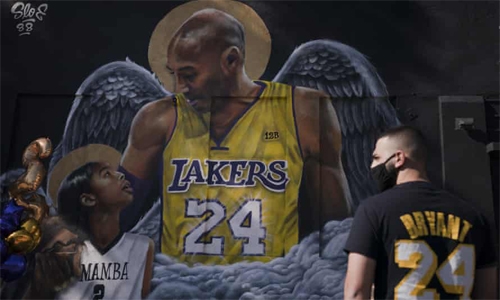 Bahrain’s basketball-loving community were united yesterday in remembering the late Kobe Bryant, as the world marked the first anniversary of his tragic passing—along with his daughter Gianna and seven others—in a helicopter crash.

Kobe remains one of the NBA’s biggest stars and is a fan-favourite around the globe.

To this day, his immense legacy lives on.

This is no different in the Kingdom, where the local basketball community continues to grow.

Muharraq Club star Bader Abdulla Malabes, who has been a die-hard Kobe fan since his rookie season, said yesterday: “It’s been one year now since the death of Kobe Bryant. Like everyone else, I couldn’t believe it at first, but when it started to sink in, it hit me so hard. It’s like someone I know, someone close to me just disappeared from this world.

“To me, he meant so much, especially basketball-wise, I’ve been following him since he entered the league. He’s the ‘GOAT’ (Greatest of All Time) for me.” Bryant, also popularly known by his nickname the “Black Mamba”, is a much-beloved figure, not only in the game of basketball but off the court as well.

While he was most admired for his ruthless ‘Mamba Mentality’ as a player, he was also a loving family man to his wife Vanessa and their four daughters. “On this day last year, I said Kobe’s mentality was a lifestyle, and that continues,” said Ahmed Dadi.

“Mamba Mentality’ for life. Rest in peace, Kobe and Gigi.” Faten Amin and Maria Elisha Esmeralda share these sentiments and paid heartfelt tributes to the global star. “It’s been a year since you’ve been gone, yet you continue to have a positive impact and inspire us every day,” said Faten. “We really miss you and wish you were here.” Maria Elisha added: “Kobe taught us so many things; he taught us perseverance, hard work and passion. But most of all, he told us to be humble as a person.

Kobe, we miss you and we love you, and we hope you are taking care of Gigi up there.”