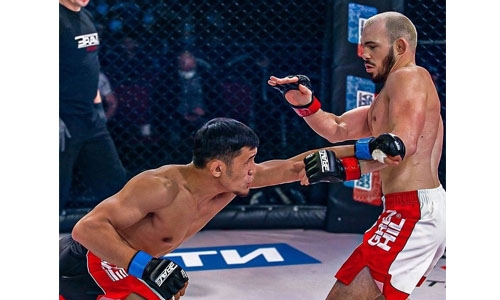 Russia’s Roman Bogatov was making headlines and attracting eyeballs with his BRAVE Combat Federation debut, scheduled for the promotion’s first card of the year, on January 16, in Sochi.

But even amid such an optimistic scenario, Bogatov managed to make a splash upon his arrival, proving himself worthy of a prominent position within the Featherweight division.

Eager to make up from his disappointing last bout, Bogatov came back to his roots, in his home nation of Russia, to find himself once again. But only motivation and hype weren’t enough to earn him his first BRAVE CF victory.

Against the fellow newcomer Nurzhan Akishev, from Kazakhstan, Bogatov had to sweat and dig deep in order to get the “W”, going as far as saying that this was the hardest fight of his 12-bout professional career. But the struggle only made success more relevant.

And now, Bogatov arrives at the BRAVE CF Featherweight division with the spotlight on him, having caught the attention of his competition. And there will be fierce competition on Bogatov’s way upwards in the weight class ranks, as he joins the likes of Dumar Roa, Gabriel Fly, and Anzor Abdulkhozhaev, Mochamed Machaev, all in the hunt of the vacant Featherweight World Title.

With a professional record of 11 wins and a single loss, Roman Bogatov has finished 6 of his opponents and is known for his unorthodox grappling and slick submissions.