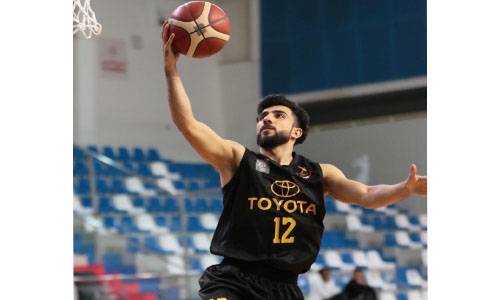 Muharraq came away with a hard-earned 91-85 overtime victory over Al Najma last night in the 2020/2021 Zain Bahrain Basketball League.

Muharraq led for most of the game but Najma were able to force the extra session late on. They were down 72-77 with five minutes left in regulation, but then a driving lay-up from Ali Jaber and a three-pointer by Hussain Mohammed with 19 seconds to go tied the proceedings. In overtime, Muharraq scored the first seven points but after Najma got to within three with under a minute to play, star forward Mohammed Kuwayed hit a tough turn-around baseline jumper to virtually ice the win for his team.

Mohammed Buallay had a near-triple double with 18 points, 10 rebounds and seven assists, while Mohammed Juma’a contributed 13 points and 13 boards.

CJ Giles had a monster effort of 40 points and 27 rebounds in defeat, while Ali Jaber chipped in with 22 and 14. The result kept Muharraq on top the league standings with an 8-1 win-loss record, while Najma stayed among the top three with a 5-3 mark. Meanwhile, defending champions Al Ahli bounced back from a loss last week with a resounding 102-82 victory over Isa Town in yesterday’s other game. After suffering their first defeat of the season at the hands of Riffa, Ahli came back with a vengeance and exerted their dominance over their opponents.

They led the entire game and went up by as many as 23. Bahraini guard Hesham Sarhan and American import Robert Upshaw combined for 61 points to spearhead Ahli.

Upshaw, meanwhile, grabbed 12 rebounds in just 20 minutes of action. Hasan Ali was their only other player in double figures with 10.

Deon Joyner paced Isa Town with a game-high 34, but it was not enough to help them get close.

Hussain Mahdi finished with 12 and Mohamed Nabeel added 11 in the loss. Ahli claimed their seventh win in eight games while Isa Town stayed winless after nine.