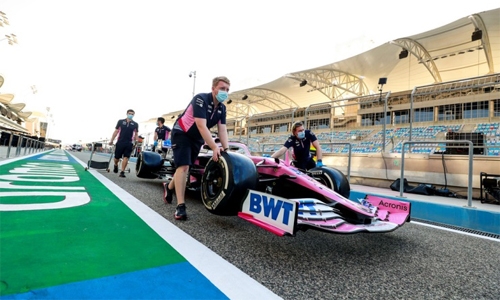 The Formula 1 Gulf Air Bahrain Grand Prix 2020 gets underway Friday (November 27) at Bahrain International Circuit (BIC) in Sakhir, kicking off the first-ever F1 double-header to be hosted by the Kingdom.

The Gulf Air Bahrain Grand Prix marks the 15th of 17 rounds in the 2020 FIA F1 World Championship. It is the first time in the history of the event that it is being held so late in the season.

Cooler temperatures await F1’s teams and star drivers over the weekend, making for a different setting for the country’s biggest annual sporting spectacle.

Friday’s action at “The Home of Motorsport in the Middle East” will be headline by two 90-minute F1 Practice sessions. The first will be held in daylight conditions starting at 2pm, while the second will take place under the brilliance of BIC’s BIC Chief Executive Shaikh Salman bin Isa Al Khalifa commented: “F1 racing is back at Bahrain International Circuit and we are thrilled to be kicking off our much-anticipated F1 double-header with the Gulf Air Bahrain Grand Prix.

“We extend the warmest welcome to our international guests who will be competing over the the next couple of weeks, and we hope everyone has a safe and comfortable stay.

“We at BIC especially look forward to welcoming our highly appreciated front-liners, first-responders and their family members, for the race on Sunday, and giving them the memorable occasion they deserve.”

A number of F1’s star drivers were joined by their engineers today for their customary pre-weekend Track Walk, to get a closer examination of the circuit in order to gain additional data for their car set-ups.

Mercedes head into the Gulf Air Bahrain Grand Prix having already secured the Constructors’ championship, but will still be looking for a repeat of their success at BIC in 2019 when Lewis Hamilton led teammate Valtteri Bottas to a stunning one-two finish.

Hamilton has also already clinched the Drivers’ title, but will be looking to maintain his spectacular form in a season where he proven to be virtually unbeatable, having won 10 of the 14 races held so far including the previous four Grands Prix.

Red Bull Racing (Max Verstappen and Alexander Albon) will be looking to mount a serious challenge, as will Ferrari (Charles Leclerc and Sebastian Vettel), who have had plenty of past success in Bahrain. Ferrari have the most victories at BIC with six, with the last win coming in 2018 for Vettel.

Racing Point (Sergio Perez and Lance Stroll), McLaren (Lando Norris and Carlos Sainz) and Renault (Daniel Ricciardo and Esteban Ocon) will also be making a strong push as they battle for maximum points to get the best placing amongst the midfield; while looking to make a surprise will be AlphaTauri (Pierre Gasly and Daniil Kvyat), Alfa Romeo (Kimi Raikkonen and Antonio Giovinazzi), Haas (Romain Grosjean and Kevin Magnussen) and Williams (George Russell and Nicholas Latifi).

Following Friday’s action, a third 60-minute F1 Practice will be held Saturday (November 28) at 2pm, to be followed by Qualifying at 5pm that evening. It will determine the grid positions for Sunday's (November 29) 57-lap night race, set for a 5.10pm start under lights.

This weekend’s racing programme will be held along BIC’s 5.412-kilometre Grand Prix Track.

Supporting F1 this weekend will be the FIA Formula 2 Championship and the Porsche Sprint Challenge Middle East.

F2 will be holding its Practice at 12.35pm and Qualifying at 4.15pm on Friday, while the Porsche Sprint Challenge will have two Practices at 11.25am and 7.55pm.

F2 is staging the penultimate round of its 2020 season at the Gulf Air Bahrain Grand Prix, while the Porsche Sprint Challenge is taking to the track for the first round of its 2020/2021 campaign.

The layout will be used for a competitive event for the very first time, and the race will feature 87 laps, which is the highest lap count of the season.

Bahrain’s F1 double-header is taking place with all precautionary guidelines in place. Although both events will be closed to the general public, frontline health workers and first responders, along with members of their immediate families, have been invited to join.
BIC has modified the seating along its Main Grandstand for those attending in a way that allows for optimal social distancing. The circuit has

also them provided kits that include a face mask, hand sanitisers and instructions reminding the spectators of all precautionary guidelines that have been put in place to help ensure the health and safety of all.