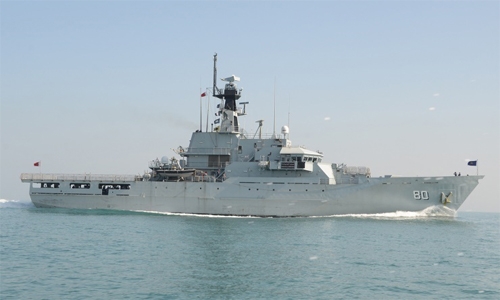 Bahrain's patrol warship, “RBNS Al-Zubara”, docked in the Salman Naval Base yesterday, ending its journey to the kingdom, which started from the English port of Falmouth in southern Britain last month, and included several stopovers in brotherly and friendly countries’ ports.

An official ceremony was held at the Royal Bahrain Naval Force (RBNF)'s Salman Naval Base to mark the warship’s arrival to the kingdom.

The new vessel will increase RBNF’s ability to carry out its sacred national duties of protecting the nation’s gains, coasts, as well as territorial and economic waters, he said, adding that it will enhance operational and development complementarity with other BDF branches and security authorities in safeguarding national achievements and supporting national projects during the prosperous era of HM King Hamad, the Supreme Commander.

RBNF Commander extended thanks to the BDF Commander-in-Chief for his direct interest in developing the RBNF, which he said, has become the kingdom’s protective maritime shield.

He also paid tribute to the commander of the mission, the captain, officers, non-commissioned officers, and crew of the “RBNS Al-Zubara” for their excellence in the training and ensuring the successful journey from Britain to Bahrain.

Patrol warship “RBNS Al-Zubara”, one of the most modern and developed offshore patrol vessel (OPV) built by British BAE Systems, possesses special features and capabilities that use modern technology in the management, operation and control of its systems, including the navigation and communication system, the engine and generator operating and control system, the fire control system, damage control and a combat system.

The design and engineering of the vessel provide it with strength and durability to operate in the worst weather conditions and during long journeys as it is supported by a helipad capable of receiving various helicopters of various weights.

The Kingdom of Bahrain, represented by the Bahrain Defence Force, had officially received the patrol warship, “RBNS Al-Zubara”, from the British BAE Systems Company in August this year. The handover ceremony was held at the HMNB Portsmouth Naval Base in the UK.