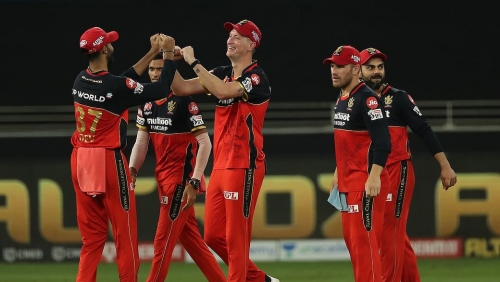 Spirited bowling performance by Royal Challengers Bangalore (RCB) guided them to a 37-run victory over Chennai Super Kings (CSK) at Dubai International Stadium. Chasing a moderate target of 170, CSK openers failed to provide a solid start as they went back to the pavilion early. Washington Sundar scalped both Faf du Plessis (8) and Shane Watson (14) in fourth and sixth over respectively. Ambati Rayudu and IPL debutant N Jagadeesan played cautiously and stitched a partnership of 64-run for the third wicket. In the 15th over, Jagadeesan fell short of his crease and was run out by Chris Morris. Jagadeesan played a knock of 33 runs.

Skipper Dhoni joined Rayudu in the middle and added a 17-run partnership for the fourth wicket. Dhoni (10) was bagged by Yuzvendra Chahal in the 16th over as he was trying to attack the spinner. Earlier yesterday, Kolkata Knight Riders bowlers staged a late comeback to defeat Kings XI Punjab by two runs in a nail-biting thriller.