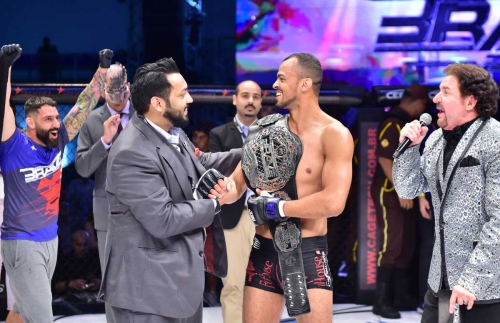 Cleiton ‘’Predator’’ has been out of action since August of last year after a historic title win at BRAVE CF 25. He ended his epic rivalry with Luan ‘’Miau’’ Santiago by snatching the BRAVE CF Lightweight belt from his arch-enemy with a 40-second submission. The fastest-growing MMA organization in the world has now unveiled a teaser on the return of its champion which is set to take place very soon.

While no date and opponent have been revealed yet, Cleiton is not short of possible foes for his first title defense. BRAVE CF has one of the deepest Lightweight divisions, which has recently been beefed up by the addition of Roman Bogatov, from Russia.

He joins a roster already containing the likes of Luan ‘’Miau’’, English prodigy Sam Patterson, BRAVE CF Breakout Fighter of the Year John Brewin, Ahmed Amir, Akhmed Shervaniev, amongst others. In his next fight, ‘’The Predator’’ can also make history by becoming the first-ever BRAVE CF Light-weight world champion to successfully defend his throne. The first champion Ottman Azaitar was stripped of the belt due to inactivity, and then Lucas ‘’Mineiro’’ lost to Abdul-Kareem Al-Selwady in a unification title bout. A l - S e l w a d y w a s t h e n knocked out by Luan Santiago in the beginning of last year, and ‘’Miau’’ lost the title to Cleiton a few months later in the aforementioned BRAVE CF 25.

BRAVE CF has put on 10 events so far in 2020, including seven of them taking place in Europe, with Slovenia, Romania, and Sweden being the homes of the organization in the continent. BRAVE CF has persevered during the Covid-19 pandemic and has put the strongest health and safety proto-cols to be one of the few organizations in world sports to return to its activities.