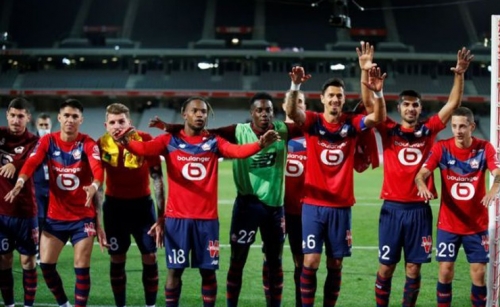 Unbeaten Lille went provisionally top of the Ligue 1 table with a comfortable 2-0 home win against Nantes thanks to an own goal and a late penalty on Friday.

Defender Nicolas Pallois deflected a Mehmet Celik strike into his own net and Burak Yilmaz converted a second-half spot-kick, putting Lille on 11 points from five games.

They lead St Etienne and Stade Rennes, who meet at Geoffroy Guichard on Saturday, by one point, Reuters reported.

Nantes, who have not beaten Lille in five years, are 14th on five points.

Lille dominated possession but Nantes was well organized in a solid 4-4-2 and kept the hosts at bay until they cracked as a result of Pallois’s unfortunate deflection in the 43rd minute.

The visitors failed to move up a gear after the interval and grew more nervous towards the end, with Dennis Appiah fouling Yilmaz in the box three minutes from time.

The Turkish striker got up to coolly convert the penalty and secure Lille’s third victory of the season.

After the St Etienne v Rennes opener on Saturday, Olympique de Marseille will take on Metz in the late game.