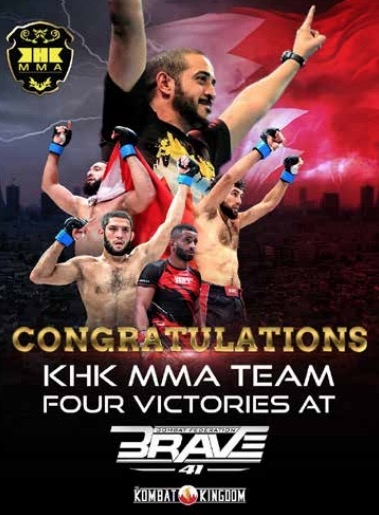 BRAVE Combat Federation hosted the first of three groundbreaking events last Thursday in the Kingdom of Bahrain, with seven bouts taking place behind closed doors at the National Stadium, in Riffa. The KHK MMA team founded by HH Shaikh Khalid bin Hamad Al Khalifa had an excellent evening, winning four of its five scheduled bouts with several high-profile fighters moving up towards a title shot.

In the co-main event of the evening, KHK Dagestan captain and one of KHK MMA most prominent athletes, Middleweight Ikram Aliskerov had another impressive performance, dominating Denis Tiuliulin over the course of two and a half rounds before getting a kimura lock, which made his opponent tap-out.

After the bout, Ikram spoke highly of the influence of KHK MMA and HH Shaikh Khalid on his training camps and hoped he would be able to challenge the new world champion Mohammad Fakhreddine in his next bout. Also moving up in his own weight-class was Ahmed Amir, who out grappled and outclassed Irish striker Cian Cowley, winning a unanimous decision in the process.

After the fight, Amir also hailed His Highness Shaikh Khaled’s influence in his career and asked for a title fight against arch-rival Cleiton ‘’Predator’’. In the night’s first fight, young Abdulla Alyaqoob earned an immense victory in his own home country, as he came from behind to earn a unanimous decision over Umed Urfonov, from Tajikistan.

Abdulla lost the first round but came back stronger, made adjustments and walked away with victory by winning the next two rounds. Finally, European IMMAF champion Magomed Idrisov started off his pro career in the best way possible, dominating a 11-fight veteran in John Cris Corton, using his wrestling to stifle any offense of his opponent and earn a victory in his first professional contest.