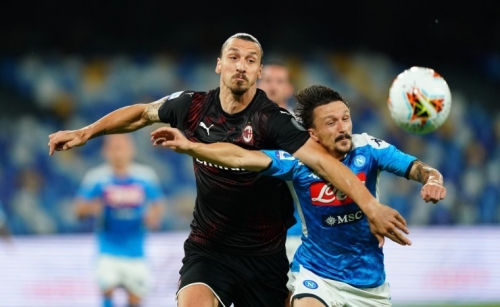 Napoli and AC Milan battled to a 2-2 draw in Naples Sunday in a north-south classic of the Italian Serie A. The Neapolitans are now two points behind fifth-placed Roma and fill the second available Europa League place, which they already secured through their Italian Cup success. Milan, in seventh, would therefore qualify as it stands.

The fourth Champions League place seems to be out of reach for Napoli as they lie 13 points off with six games left, according to Deutsche press agency (dpa).

At the San Paolo Gianluigi Donnarumma saved two close-range efforts from Napoli forwards Dries Mertens and Jose Callejon, while David Ospina stood no chance in the 20th minute as Theo Hernandez volleyed in off Ante Rebic on the Devils' first attempt.

A flawed save from Donnarumma on a free-kick allowed Giovanni Di Lorenzo an easy lay-in in the 34th and the Italian international dithered again when Mertens fired low on the hour as Callejon squared from the right.