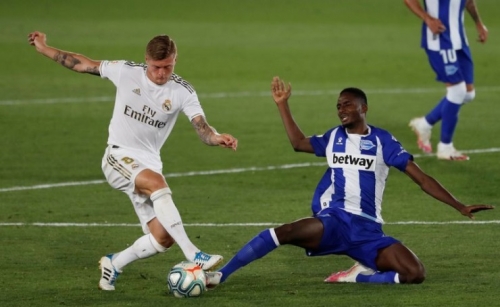 Real Madrid took another step towards their first La Liga title in three years by beating free-falling Alaves 2-0 at home on Friday, overcoming a number of high-profile absences to secure their eighth consecutive victory.

Real were missing three of their first-choice defenders as captain Sergio Ramos and Dani Carvajal were suspended and Marcelo was injured but they again showed their defensive solidity and recorded a fifth consecutive clean sheet.

Zinedine Zidane’s side got off to a comfortable start as Karim Benzema converted from the spot in the 11th minute after Ferland Mendy was judged to have been fouled by Ximo Navarro just as he entered the area, Reuters reported.

It was the third game in a row in which Real had broken the deadlock thanks to a penalty and they sealed the win when Benzema turned provider and allowed Marco Asensio to tap into an empty net early in the second half.

Real moved on to 80 points, restoring their four-point lead over second-placed Barcelona with three games remaining. Alaves meanwhile fell to a sixth consecutive defeat which left them in 17th place, hovering three points and one position above the relegation zone.