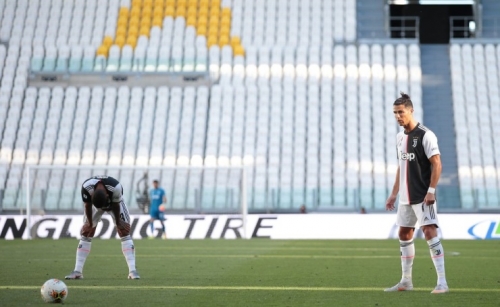 Paulo Dybala and Cristiano Ronaldo netted and goalkeeper Gianluigi Buffon set the Serie A appearance record in Juventus' 4-1 defeat of Torino Saturday, which put the leaders seven points clear of Lazio thanks to the Romans' late 3-0 meltdown against AC Milan.

Dybala opened the scoring on three minutes, storming in the box and finding the net as Armando Izzo deflected his shot. He and Ronaldo have struck in all of the four games played since the league recommenced after the coronavirus lockdown, Deutsche press agency (dpa) reported.

Dybala had also scored in the last game before Serie A was suspended in early March and was one of 23 top-flight footballers who suffered contagion. Juan Cuadrado then fired firmly into the far corner as Ronaldo fed him on the right 29 minutes into the Turin derby, which opened matchday 30 at Juve's Allianz Stadium.