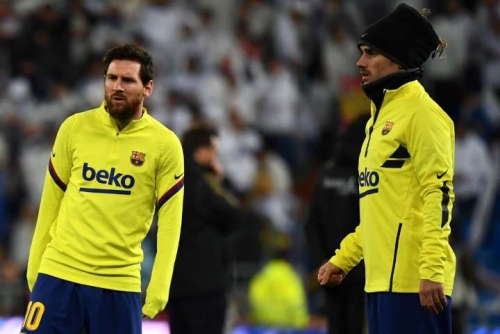 Barcelona coach Quique Setien moved to ease concerns yesterday about the futures of Lionel Messi and Antoine Griezmann. Messi’s contract is due to expire next year and, according to Spanish radio station Cadena Ser, the Argentinian has stopped talks due to frustrations with the direction the club is going in.

Asked about suggestions Messi plans to leave Barcelona, Setien said: “I won’t speculate about this because I haven’t heard from him so I’m not aware of him saying anything. “I see him well, everything else is speculation that I won’t get involved in. We speak about what we have to speak about and nothing else.”

Griezmann’s position is also in doubt after a disappointing first season since joining from Atletico Madrid. Barcelona play away at inform Villarreal on Sunday, with Real Madrid sitting four points clear at the top of the table. “He’s fine, I exchanged a few words with him. He’s a great professional.

He understands the situation because he’s seen it before,” Setien said about Griezmann.“It will not affect him because he is a very positive person. We can count on him 100 per cent.” Griezmann has started three of Barca’s last four matches on the bench, including the crunch games against Sevilla and Atletico, both of which Barcelona drew. Setien described Griezmann as “unquestionable” last month.