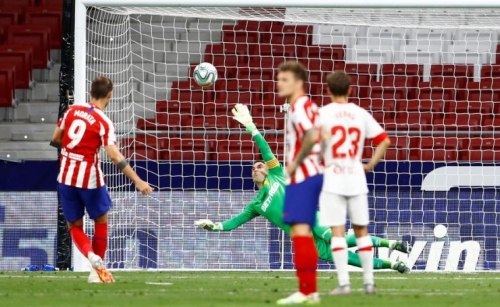 Atletico Madrid stayed firmly on course to secure Champions League football next season after two goals by Alvaro Morata and a late strike from Koke gave them a 3-0 home win over struggling Mallorca in La Liga on Friday. The result left Atletico third on 62 points from 34 games, five ahead of fourth-placed Sevilla and eight in front of fifth-placed Villarreal who both have a game in hand, Reuters reported.

Mallorca have a only slim chance of avoiding relegation as they remained third-bottom on 29 points from 34 games, five behind 17th-placed Celta Vigo who have played a game less. Morata fired Atletico ahead in the 29th minute with a twice taken penalty after goalkeeper Manolo Reina was harshly adjudged to have come off his line when he saved the initial spot-kick.

Morata doubled the home side’s lead on the stroke of halftime when he tapped the ball in from close range after a fine cut-back by Marcos Llorente from the right flank. Atletico dominated the game but Joao Felix wasted two good chances in the opening half and substitute Renan Lodi shaved the crossbar with a fine shot from a tight angle in the 73rd minute.

Midfielder Koke sealed the win in the 79th with a deflected shot from outside the penalty area, as his swerving volley left Reina stranded after it clipped substitute Juan Sastre’s heel. Atletico next visit Celta on Tuesday, while Mallorca host 12th-placed Levante on Thursday.