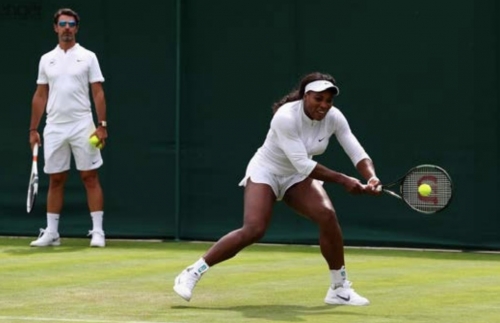 Serena Williams committed to play at this year’s US Open yesterday as US Tennis Association officials vowed they can safely stage the first Grand Slam since the coronavirus pandemic shutdown. With top men’s stars questioning the wisdom of the staging the event, the USTA said the event will be staged August 31 to September 13 without spectators at New York’s National Tennis Center, which in April became a temporary hospital facility to combat the coronavirus pandemic.

“I really can’t wait to return to the US Open 2020,” Serena Williams said in a video message. “I think the USTA is going to do a really good job of ensuring everyone is going to be safe. “This is crazy. I’m excited.” The Flushing Meadows fortnight will be the first Grand Slam event staged since the deadly virus outbreak shut down global sport.

Wimbledon was cancelled and the French Open was postponed until September. The site will also host the ATP Western and Southern Open, typically staged in Cincinnati, the week before the US Open with a similar safety “bubble” that includes testing for players and their entourage.

Novak Djokovic has been among several top players critical of the idea of staging the US Open as scheduled given the severe US impact of COVID-19, although the major issues in the New York area have been declining for several weeks. “It’s the right decision for tennis,” said USTA chief executive officer Mike Dowse.

“Our fans told us unequivocally they’re excited to see the best players in the world.” Players will be tested for COVID-19 when they arrive at the tournament hotel and at least once a week thereafter, with those electing to stay at private homes being tested more often as they enter the “bubble” area of the tournament.