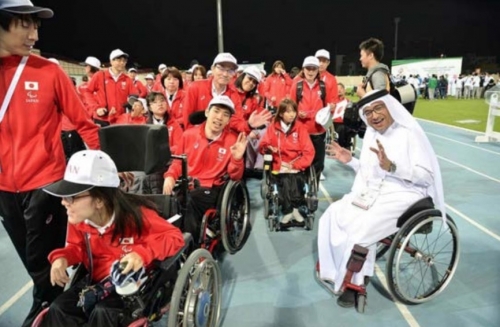 Shaikh Mohammed bin Duaij lauded the directives of the Representative of His Majesty the King for Humanitarian Work and Youth Affairs, National Security Advisor and Chairman of the Supreme Council for Youth and Sport, His Highness Shaikh Nasser bin Hamad Al Khalifa, to host various championships.

He also paid tribute to the First Deputy Chairman of the SCYS, and President of the Bahrain Olympic Committee, HH Shaikh Khalid bin Hamad Al Khalifa, for his support for all sports. NPC President expressed thanks to APC for its high confidence in the kingdom’s ability to host such a tournament, affirming NPC’s full readiness to ensure the success of the event, stressing Bahrain’s ability to host various sporting gatherings.

APC President Majid Rashid said that Bahrain’s NPC had put together a strong bid to host the next Asian Youth Para Games, expressing thanks to Bahrain for supporting the next generation of Asian Para a thletes. NPC Secretary- General, Ali Al-Majid, said that about 800 under-20 athletes are expected to compete in nine sports: athletics, badminton, boccia, goalball, taekwondo, powerlifting, swimming, table tennis and wheelchair basketball.

He highlighted the NPC’s strategy to put the kingdom in the world’s paralympic map through preparing Bahraini athletes who are capable of competing at the international level and achieving advanced positions.