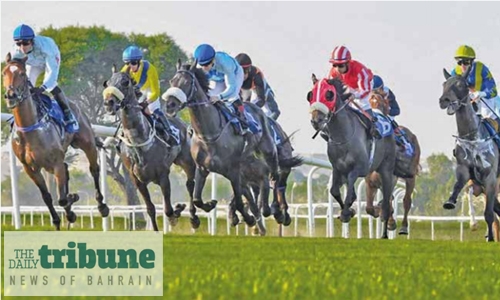 Rashid Equestrian and Horseracing Club (REHC) has lined up an exciting racecard of eight events, scheduled to take place today at the club premises in Riffa. Five of the races will be offering a Lexus Cup, while one is for the Royal Golf Club Cup and another for the Fatees Al Hajeri Cup.

The two main events of the day are the eight and seventh races, both for a Lexus Cup. They offer the richest total prize of the meeting at BD3,000 apiece. The eighth race is over seven furlongs and it is for imported horses two years old and up, rated zero to 80.

A total of 15 have entered, representing some of the country’s top owners and trainers. The seventh race is over nine furlongs, and it is also for imported horses aged three and up. Only six are entered in the event, with three being tipped to have a chance at the win. They include Inclination, owned by Al Afoo Racing Stable, trained by Mohammed Saeed and ridden by Lee Newman; Jensue, competing for Khalid Abdulrahman Janahi, Khalid Al Khatri and Ebrahim Nader; and Bint Soghaan, racing for FF Racing, Khalid Al Khatri and Abdulla Faisal.

The fifth, second and first races of the day are also for a Lexus Cup. Race five is over six furlongs with a BD2,000 total prize. A total of 13 imported horses aged three years old and up are competing, with Likethelook, Roman River and Five Angels all tipped with a chance.

Likethelook is competing for Ramadhan Stable, Jaber Ramadhan and Abdulla Faisal; Roman River is for M and E Racing, Alan Smith and Paddy Mathers; while Five Angels is racing for Victorious, Yousif Taher and Anas Al Siyabi. The second race is over a straight of six furlongs with a BD2,000 prize for imported three-year-olds.

With a chance are Aryaaf, owned by Al Afoo Racing Stable, trained by Mohammed Saeed and to be ridden by Lee Newman; Teenar for Al Mohamediya Racing, Ali Al Ansari and Paddy Mathers; and Bill Neigh competing for FF Racing, Khalid Al Khatri and Ebrahim Nader.

The sixth race of the day is for the Royal Golf Club Cup, and it covers eight furlongs with a BD2,500 total prize. Fourteen locally bred horses are entered. The third race for the Fatees Al Hajeri Cup is over six furlongs with a BD1,500 prize.

Tipped with a chance are Krayan 1706 owned by Victorious, Al Saqlawy 1757 owned by Safra, and Kuheilan Umm Zorayr 1766, also owned by Safra.

Rounding up the day’s events is the fourth race for locally bred horses aged three years old and up. Seven are entered, and they will be competing over six furlongs for a share of the BD2,000 total prize. All are welcome to REHC today. Entrance is free.