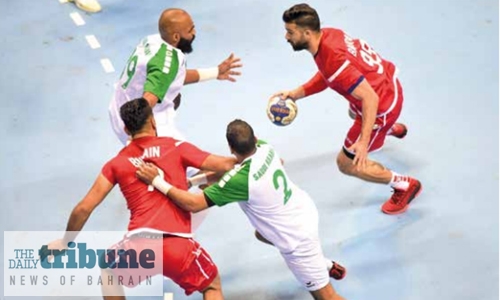 Ahmed Fadhul sent Bahrain into the semi-finals of the 2020 Asian Men’s Handball Championship yesterday after firing in the winning goal in a dramatic 18-17 victory over Saudi Arabia in their concluding main round game at Shaikh Saad Al Abdulla Sports Hall Complex in Kuwait City.

Fadhul scored from the six-metre line on the right wing just as time expired, gifting the Bahrainis the last-gasp win and surviving a scare in the competition, where they have been billed as one of the pre-tournament favourites. With yesterday’s result, the Bahrainis also earned one of the four coveted berths in the 2021 IHF World Men’s Handball Championship in Egypt. It will be their fourth appearance at the global competition following their previous participations in 2011, 2017 and 2019.

Bahrain are advancing to the Asian tournament’s final four as runners-up from Group One in the main round. They completed the stage with two wins from three matches for four points. Japan were the group winners with a full six points. They closed out this phase with a comfortable 31-19 win against the UAE yesterday.

The Emiratis end the main round in third place with one victory and they now play in the game for fifth place; while Saudi, who were winless in three outings, will play for seventh overall. Bahrain face Group Two winners Qatar in the semi-finals, which are scheduled to take place tomorrow. It will be a re-match of the final of the 2019 edition of the tournament, which the Qataris won to claim the gold medals.

Bahrain will be hoping to reverse that result this year. The Japanese, on the other hand, face either South Korea or Iran, whoever finishes as runners-up in Group Two. The other team in their division, hosts Kuwait, have been eliminated from further contention and will take on Saudi for seventh on the final classification. Bahrain got off to a brilliant start yesterday as they took a commanding 5-0 lead against the Saudis.

They continued to have firm control of the contest at the half with a 10-6 advantage. In the final 30 minutes, however, the Bahrainis were shaky and they began to let their opponents back into the game. In the dying minutes, the Saudis were able to go ahead by a single goal but Bahrain’s Ali Mirza was able to level the proceedings once more. The Saudis were then unable to find the net on their final possession, giving the ball back to Bahrain with less than half-aminute to play.

The Bahrainis were initially stopped in their first attempt to score, but after regrouping, Fadhul received the ball at the right corner of the court and then timed his move perfectly, taking a shot at the game’s very last second and scoring the winner past the Saudi goalkeeper as the final buzzer went off.

The goal was one of four from Fadhul in the contest. Teammate Ahmed Almaqabi was Bahrain’s leading scorer with five. Mirza and Mahdi Saad each finished with two, while Ali Eid, Hasan Al Samahiji, Bilal Askani, Jassim Alsalatna and team captain Hussain Al Sayyad all finished with one goal. Ahmed Hazazi and Sadiq Almohsen both topped the Saudi scoresheet with four goals apiece.