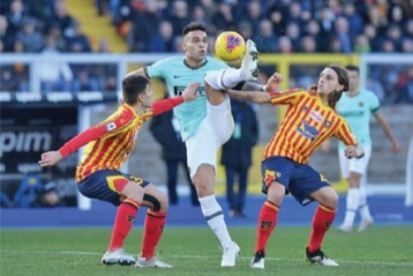 Antonio Conte’s Inter looked to be bringing home maximum points from his hometown team, where he started his footballing career in the 1980s, when Alessandro Bastoni headed the away side in front with 18 minutes remaining.

But Marco Mancosu grabbed a precious point for the southerners five minutes after going behind.

Inter have won just two of their last six league games but are one point behind leaders Juventus, who can however open up a four-point advantage when they host Parma later yesterday.

Conte’s side are now also under threat from Lazio who are just two points behind with a game in hand after hammering Sampdoria 5-1 on Saturday.

Star striker Zlatan Ibrahimovic got his first start at the San Siro after scoring last weekend at Cagliari.

The 38-year-old Swede did not get to celebrate on front of the home crowd but he has provided a confidence-boost for the seven-time European champions, who have taken seven points in three matches since his return.

“But I’m satisfied with our performance, we put our heart and soul into winning it.

“The arrival of Ibrahimovic has given us even more depth and conviction, which has helped us.”

However, Pioli’s side needed to fight back after Jens Stryger Larsen opened the scoring in the seventh minutes for the away side, who were coming off a run of three consecutive wins.

But the hosts upped the pace in the second half with former Eintracht Frankfurt player Rebic coming on after the break to equalise minutes later.

Theo Hernandez put Milan ahead with a powerful volley on 72 minutes, to take his tally to five league goals this season.

Kevin Lasagna got Udinese back level five minutes from time but Rebic had the final word deep into injury time to lift Milan to eighth, two points off the Europa League places.