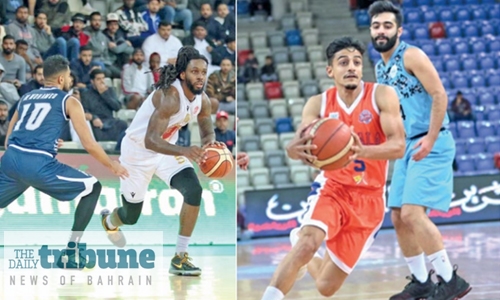 Defending champions Muharraq escaped with 112-108 double-overtime victory over Al Najma last night to punch their tickets to the Golden Square semi-finals of the Zain Bahrain Basketball League, while Riffa forced a decisive third game in their playoff series after beating Al Hala 81-67.

Muharraq joined Al Ahli and Manama in the last four after sweeping their match-up with Najma in two games. Riffa, meanwhile, stayed in contention for the Golden Square after tying their play-off at one win apiece. They now play a winner-take-all contest on Saturday for the last semi-final place. In Muharraq’s win, the victors were able to overcome a spectacular game from Najma’s American professional CJ Giles.

The six-foot, 11-inch centre made two free-throws with seven seconds remaining to tie the game at 93-all at the end of regulation. Things stayed close throughout the first overtime period, and Najma had their chances to close the game out.

Fadalallah Abbas banked in a three-pointer with two-and-a-half minutes remaining to give them a 101-98 lead and then Giles hit a turnaround jump shot to make it 103-100 with 49 seconds left. But then Muharraq import Kevin Murphy was fouled with 17 seconds to go and the referees controversially awarded the American three freethrows.

Murphy was declared to be in the act of shooting a three-pointer when being fouled, and the former NBA forward coolly sank all three charity shots to send the game into a second overtime. Murphy later made it 110- 106 with two minutes to go in overtime number two, and after Giles brought them back to within two, he missed two freethrows with 22 seconds to go that could have tied the game once more.

Ahmed Hassan Aldurazi then iced the win for Muharraq with another two free-throws. Murphy finished with 38 points and 15 rebounds to lead the victors, while Mohammed Buallay nearly had a triple-double with 26 points, eight rebounds and 10 assists. Giles had a monster effort of 47 points and 30 rebounds in defeat, while Ali Jaffar added 15 including four three-pointers. In Riffa’s victory, they came up big in the fourth quarter as they fought to keep their season alive.

Riffa outscored Hala 29-11 in the period to turn a 52-56 deficit after the third quarter into the hard-earned, 14-point win. Joseph Jones scored 22 points and grabbed 16 rebounds to spearhead Riffa while star forward Mohammed Kuwayed added 21 points and six assists in only his second game back after returning from a lengthy lay-off due to injury.