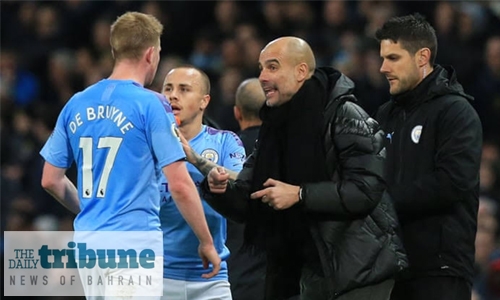 Pep Guardiola says Manchester City may no longer be able to match the standards of the best teams after a painful defeat against Manchester United left them 14 points behind Premier League leaders Liverpool. Guardiola’s City have been the Premier League’s outstanding side over the past two years, clocking up 100 points in 2017/18 and retaining the title last term during their treble-winning campaign.

Guardiola hopes City, who have now lost four of their 16 league games this season, will be able to learn from their setbacks. “United have the quality to defend and the quality to attack on the counter-attack and you have to accept that,” said the City boss. “That is the level we face against Liverpool, United, Barcelona, Madrid, Juventus. They are the teams we have to face and the reality is maybe we are not able now to compete with them.

“We have to improve and accept it and move forward. Maybe we need to live that as a club to improve, to accept the reality now and improve.” Guardiola, however, is not ready to give up on his side’s title defence and there is also plenty more to play for in the remainder of the campaign.

City have already qualified for the last 16 of the Champions League ahead of Wednesday’s final group game against Dinamo Zagreb, are through to the League Cup quarter-finals and have a kind draw for the start of their FA Cup defence next month. “The reality is we are 14 points behind for the mistakes we have done, for the quality of our opponents and especially, as well, the things we cannot control,” said Guardiola. “That is the reality but we have to continue.