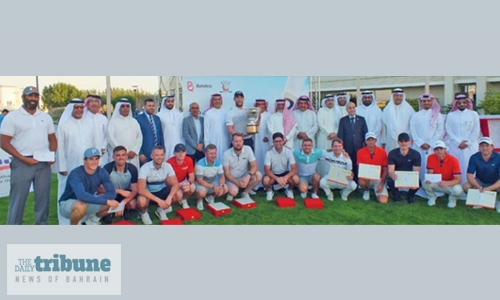 British professional Luke Joy was yesterday crowned champion of the 12th King Hamad Trophy golf championship, which came to a thrilling conclusion at The Royal Golf Club at Riffa Views. The UAE-based golfer stormed back from being six shots behind leader and countryman Sean Towndrow to force a dramatic play-off.

He then beat Towndrow by just one stroke to clinch the coveted title after re-playing the par-four 18th. It was the second time he won the tournament. Following the play-off, Joy was presented the King Hamad Trophy in an awarding ceremony attended by the tournament’s Supreme Organising Committee chairman Major General Ali bin Saqr Alnuaimi and other high-ranking officials. This year’s event featured a total of 96 players from 20 countries.

It was organised by the Bahrain Golf Association, and the main sponsors were Batelco. Joy carded a scintillating eightunder-par 64 for the final day, including nine birdies. That completed his three-round campaign with a 13-under-par gross total of 203 strokes. He matched the final gross score of Towndrow, who was the leader heading into the last 18 holes. He played a two-underpar total of 70 yesterday, but only had two birdies, with his second coming on the final hole to help force the play-off.

Finishing in third place was Craig Ross, also from Great Britain, with a final round of 69for a 10-under-par gross total of 206, while fourth amongst the professionals was South African Mathiam Keyser with a 208 total, having played a 72 in the last round. Completing the top fiveranked pro players was Liam O’Neill with an impressive last round of 67 for an overall gross of 209.

Meanwhile, Callum Farr emerged in first place amongst the amateurs. He also had the fourth-best score overall, finishing eight-under 208 over three rounds after playing a 70 on day three. Fellow-Briton Jake Bolton was second amongst the amateurs, while Matty Lamb (209), Charlie Strickland (211) and Laird Shepherd (214), all also British ama - teurs, were third through fifth, respectively. The topranked Bahraini player to end the competition was Mohammed Diab Alnuaimi.

He was 36th overall among the 45 players to make the cut for the final round. He finished with a three-day gross score of five-overpar 221 after shooting a 76 yesterday. Nasser Yacoob was the only other Bahraini competing on the last day. He was 42nd overall after finishing nine-over-par 225.