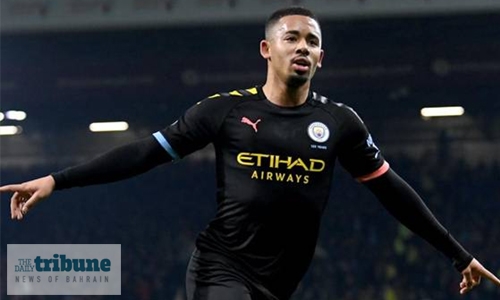 Gabriel Jesus scored twice as Manchester City showed no signs of giving up their Premier League title without a fight as a 4-1 victory at Burnley cut the gap on unbeaten leaders Liverpool to eight points. Pep Guardiola’s men have struggled to match the blistering standards they set in back-toback title-winning seasons, but looked more like their old selves in what could have been a tricky trip to Turf Moor.

Jesus made the most of his chance to shine in the absence of the injured Sergio Aguero with two brilliant finishes either side of half-time to end an eightgame goal drought before longrange strikes from Rodrigo and Riyad Mahrez moved City above Leicester into second place on goal difference.

“The strikers are there to score goals and we need him,” said Guardiola of Jesus’s importance with Aguero also expected to miss Saturday’s Manchester derby. “His effort, his commitment is always there but strikers like him and Sergio live for the goal and it’s important.” Robbie Brady pulled a late goal back for Burnley, who remain in 11th. “City are a top-class side and they showed it tonight,” said Burnley boss Sean Dyche.

“We kept it tight first half and made it awkward but they were excellent second half and we never got to grips with it.” The visitors were dominant from first minute to last and could have been far more convincing winners but for some wayward finishing and Nick Pope’s resistance in the Burnley goal.

“We played a good game, we controlled them and we didn’t concede much apart from the goal in the last minutes,” added Guardiola. “Our level was so good in most of the games. I don’t have the feeling we played bad in certain games. In general, I’m more than satisfied with the level of the team.”