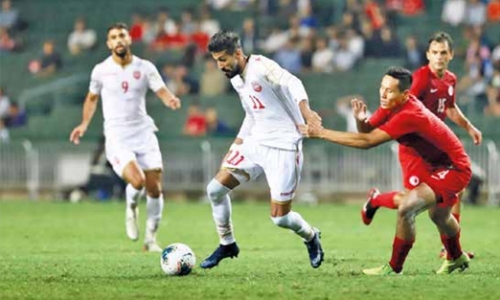 Bahrain were held to a disappointing goalless draw by Hong Kong yesterday in an away joint-qualifying match for the Fifa World Cup 2022 and the AFC Asian Cup 2023. The Bahrainis were heavily favoured heading into the contest after previously being co-leaders of qualification Group C. But they could not find the net despite having several chances to score.

Meanwhile, Alaa Abbas headed in the winning goal in the second minute of second-half stoppage time to lift Iraq to a 2-1 victory over 10-man Iran in last night’s other divisional fixture, played in Amman. Mohanad Ali opened the scoring for the Iraqis in the 11th minute, but Ahmad Nourollahi equalised for the Iranians in the 25th. Iran skipper Masoud Shojaei was then shown the red card in the 81st minute following a second bookable offence.

That set the stage for Abbas’s late decider, which came off a corner. Iran goalkeeper Alireza Beiranvand was able to get his hand on the ball, but he couldn’t stop it from bouncing into the net. Following both matches, Iraq moved to solo first place in the Group C standings where they now have 10 points from four matches, two ahead of Bahrain. Iran are third with six points, followed by Hong Kong with two and Cambodia with one.

In Bahrain’s stalemate, the nationals had the better scoring opportunities but they could not find the finishing touch. Hong Kong goalkeeper Yapp Hung Fai was also in top form, denying the Bahrainis multiple times in the game. Bahrain’s star striker Ismaeel Abdullatif had a shot right in the face of goal parried by Yapp in the 41st minute. Then, at the stroke of halftime, influential midfielder Mohammed Abdulwahab had a free-kick on target collected by Yapp. In the second half, Bahrain continued their fierce attack but the Hong Kong back-line remained defiant.

In the 62nd minute, Abdulwahab Al Malood had a close shot go just over the crossbar from an acute angle, and then Komail Alaswad had successive long-distance attempts, both go straight to Yapp. With time nearly running out, the Bahrainis grew increasingly desperate to find a winner. Abdullatif squandered a brilliant chance in the 85th minute with a close-range shot right into the outside-right wall of the net.

Abdulla Yusuf came on for Abdulwahab, Sayed Redha Isa for Bughammar, and Madan substituted Alaswad, all in the second half. Bahrain now have little time to rest as they next have to prepare for their joint-qualifier against the Iraqis on Tuesday net week. The game will also be played in Amman. Hong Kong hosts Cambodia that same night.

Majid Al Futtaim to phase out single-use plastic by 2025