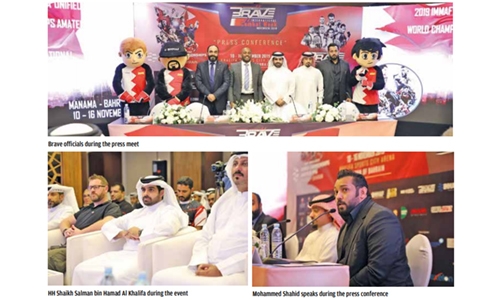 In the presence of Shaikh Salman bin Hamad Al Khalifa, president of the Bahrain Combat Sports Council, BRAVE International Combat Week (ICW) was officially launched in a press conference held at the Wyndham Garden Hotel, in Manama, Bahrain. The week-long event will feature the IMMAF World Championships as well as a special edition of BRAVE Combat Federation, the biggest-ever Bahraini brand and the fastest-growing MMA promotion in the world.

The action officially starts on November 11th, with hundreds of matches taking place throughout the week, before BRAVE CF 29 hits the Khalifa Sports City Arena with 15 explosive bouts including the first-ever KHK World Championship. On November 10th, the Opening Ceremony of the BRAVE International Combat Week will take place with the presence of several key figures in the MMA world.

Mohammed Shahid, president of BRAVE Combat Federation, spoke about the importance of the BRAVE International Combat Week for Bahraini sports in general and praised Team Bahrain, the number-one ranked team in the world for mixed martial arts, a feat never before achieved in the Kingdom. It is Shahid’s hopes that Bahrain will remain in the top position at the end of the IMMAF World Championships, a vision shared by Mohammed Qamber, president of the Bahrain MMA Federation.

“Through the tireless work of HH Shaikh Khalid bin Hamad Al Khalifa, Bahrain has been able to step forward as a major force in MMA, and now we are the number one team in the world. It is my hope that all Bahrainis will cheer on their own team in the pursuit of maintenance of our ranking. This is a momentous occasion for our Kingdom and its people will surely get behind our athletes as we make history once again”, said Shahid.

Joining both men was Kerrith Brown, president of IMMAF, who stressed the ties between his Federation and the Kingdom of Bahrain and thanked HH Shaikh Khalid for all the support given for the development of mixed martial arts not just in Bahrain but all over the world. Brown also wished the best of luck to Team Bahrain at the upcoming Championship, claiming that the Kingdom had some of the most talented athletes in the world.