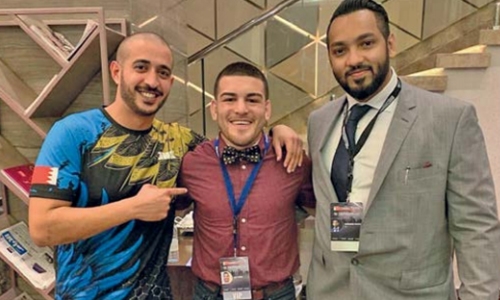 Jose Torres’ story with the Kingdom of Bahrain is much broader than his signing with BRAVE Combat Federation, the biggest Bahrain-born brand ever. The Flyweight world title contender has been one of the first beneficiaries of HH Shaikh Khalid bin Hamad Al Khalifa’s commitment to the sport of mixed martial arts. As he prepares to fight for the Flyweight belt at BRAVE CF 29, on November 15th, he wants to make sure that he repays the faith shown to him by KHK MMA and HH Shaikh Khalid himself.

Torres is one of the world’s best fighters nowadays, but he was beginning his career when Shaikh Khaled took him under his wings and made him a part of the first generation of KHK MMA fighters, alongside giants of the game, such as Khabib Nurmagomedov and Frankie Edgar. “Shorty” was given all the structure needed to train and develop his skills and is still grateful for the impact that period had in his life, calling himself a KHK fighter.

The American fighter thrived in his career, becoming a double-gold world champion at the IMMAF World Championships, in his amateur days, and then forging a successful professional career, with more titles, and only one loss in nine pro bouts. Last year, he signed officially with BRAVE Combat Federation, becoming a part of His Highness Shaikh Khaled’s vision for the development of mixed martial arts on a professional level.

Torres signed on to fight in Jordan and beat a tough Amir Albazi via unanimous decision. The victory was impressive enough for him to earn a title shot against the division’s best striker. He will fight in front of His Highness for the first time and hope that his story with Bahrain has a crowning moment, preferably with the BRAVE Combat Federation belt around his waist.

Manama rally past over Isa Town in BBA Cup