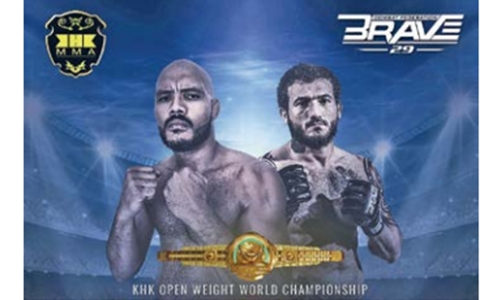 Brazil will have two representatives at the upcoming KHK World Championship. After Moise Rimbon pulled out due to undisclosed reasons, Kleber Orgulho will have the chance to become the first-ever KHK World Champion, as he has stepped up to take on Mohammad Fakhreddine in the semifinals, during BRAVE CF 29, on November 15th, in Bahrain.

The winner of this battle of top strikers will face off against the winner of Guto Inocente vs Azamat Murzakanov, later on the same night, as whoever comes out of top of the one-night, four-men, open weight tournament will win a US$100,000 check, as well as the right to be called the provisional holder of the KHK belt, the most expensive prize in sports, adorned with 6.2 kg of gold. A veteran of 29 fights, Kleber will make his debut in the Kingdom of Bahrain with plenty of experience in international events.

He has 18 victories, 12 of which have ended by knockout. “Orgulho”, which means Pride in Portuguese, is riding a two-fight win streak, with two finishes in his last two fights. The Brazilian will meet one of the most feared strikers in the world. Representing BRAVE CF and the Middle East at the KHK World Championships, Fakhreddine is known for his ferocious kicks and heavy hands.

His power was in full display during his last appearance, a 40-second TKO destruction of Christofer Silva, with “The Latest” scoring the stoppage win via leg kicks, which broke Silva’s leg. The KHK World Championships will take place alongside the BRAVE CF 29 fight card, during the BRAVE International Combat Week, which will also feature the IMMAF World Championships, when more than 500 athletes from 50+ countries will descend upon the Kingdom of Bahrain for the Olympics of MMA.