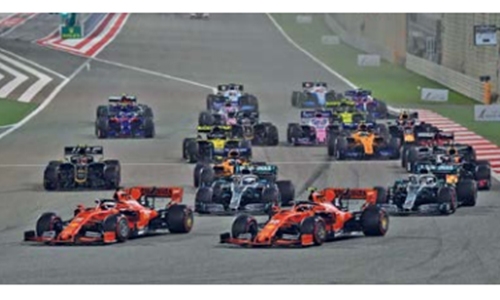 Bahrain International Circuit (BIC) announced yesterday the launch of ticket sales for the Formula 1 Gulf Air Bahrain Grand Prix 2020. The region’s biggest annual event is scheduled to take place March 19 to 22 next year, and race fans need not wait any longer to secure their seats for the racing and entertainment spectacle at “The Home of Motorsport in the Middle East” in Sakhir. Tickets can be purchased online at BIC’s official website www.bahraingp.com or by calling the BIC Hotline on +973- 17450000.

The much-anticipated launch of ticket sales comes with a fabulous limited-time offer, as BIC is giving discounts of up to 20% under the first phase of its Early Bird promotion. This 20% price reduction is available for tickets to BIC’s Main Grandstand, while a 15% discount is applied for tickets to all other grandstands including the Turn One Grandstand, Batelco Grandstand, University Grandstands and Victory Grandstands.

These Early Bird discounts are available for a limited time only, so fans are advised to act quickly and purchase their tickets at the earliest opportunity to get the best value for money. Ticket prices for the massive event remain the same for the seventh year in a row, and they are once again amongst the most competitive in Formula 1. Under the Early Bird offer, four-day tickets to the Main Grandstand are now BD120, reduced from the original price of BD150.

A four-day ticket to the Turn One Grandstand costs BD85 under the reduced price, down from BD100, while fourday tickets to both the University and Victory Grandstands are now BD51 apiece with the Early Bird offer, reduced from the original price of BD60 each. There are three available options for Batelco Grandstand Tickets. They can be purchased for the full four-day race weekend for BD108, reduced from BD120.

They can also be bought for just the Friday of the event for BD51 instead of BD60, or for just the Saturday and Sunday for BD85, reduced from BD100. The Gulf Air Bahrain Grand Prix is set to mark the second of a record 22 rounds on the 2020 FIA Formula 1 World Championship.

The race weekend is set to include not only Formula 1 racing, but also plenty of other action on the track. There will also be plenty of off-track fun and family entertainment, all of which will be headlined by the unforgettable live concerts featuring some of the music industry’s biggest international artists.

Amazon says customers have to secure own data