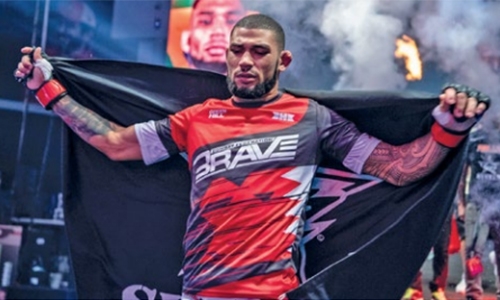 Former Lightweight world champion Luan “Miau” Santiago is one of the biggest attractions of BRAVE CF 29, which takes place at the Khalifa Sports City Arena, in Isa Town, Bahrain, on November 15th. He will move up in weight to face Gadzhimusa Gaziev in a Super Lightweight bout, right after losing his Lightweight belt in stunning style, as a mistake led to him being submitted by reigning champ Cleiton “Predator”.

Right before that, however, Luan was riding high after a KO of the year candidate against Abdul-Kareem Al-Selwady made him the world champion. It was a long road for Santiago, who had his first Bahrain bout last year. He is hoping the Kingdom will once again prove a good luck charm for him. “I’ve fought in Bahrain before. There’s no extra pressure fighting in front of HH Shaikh Khalid or my president Mohammed Shahid.

I love Bahrain, I feel comfortable there. It’s my second home, as I like to say. It’s perfect that I’ll get the opportunity to bounce back in style at such a high-profile event in Bahrain. I actually rather fight there than in Brazil, if I’m being honest”, said Luan. As he prepares to face off against Gaziev, he still hopes for a match-up against Cleiton “Predator” down the line.

For now, however, he has the raw KO power of “Deadshot” to deal with, and has his eyes on the prize, as he feels a win over Gadzhimusa can catapult him to the top of both divisions. “It doesn’t really matter in which division I get to hold the belt. Destiny has made me a world champion and losses are temporary.

I am the champion and I’ll always be the champion”. BRAVE CF 29 will be a part of a historic moment for sports in the Kingdom of Bahrain, with the BRAVE International Combat Week coming up on November 10th, starting with the IMMAF World Championships, until November 16th.