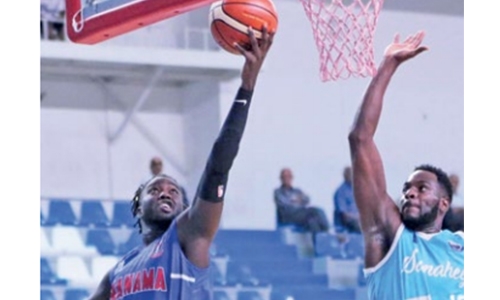 Manama registered a lopsided 102-66 victory over Samaheej last night in their Group B match of the Bahrain Basketball Association (BBA) Cup. The victors built a commanding lead early on and never looked back, going ahead by as many as 38 points en route to the final whistle. Manama ended the first quarter up 30-17, and then they extended their lead to 53-27 at the half.

Samaheej put up a spirited fight in the third to momentarily prevent their opponents from stretching the advantage, but their resistance would not last in the fourth as Manama twice posted their biggest lead late in the period. American professional Christopher McKnight led for players in double-figures with 19 points to go along with four steals.

Mohammed Hussain added 18 markers with three three-pointers, while court general Hussain Shaker had 16 points and 10 assists. Husain Safar came off the bench to contribute 13, also with three triples. For Samaheej, Ahmed Fateel had 18 points but committed a horrendous 11 turnovers in the loss. US import Antwan Wilkerson had a triple-double, but it was of the unconventional kind.

He scored 17 points and took down 15 rebounds but also had 10 turnovers. Cup action continues tomorrow with two games. At 5.30pm, Muharraq face Nuwaidrat in a Group A game while Al Najma take on Al Ahli at 7.15pm, also in Group A.