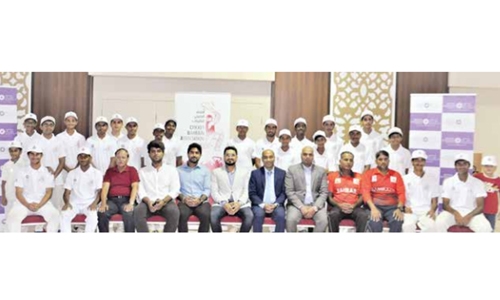 The Bahrain Under16 National Cricket Team is traveling to Oman to participate in the Asian Cricket Council Under16 Championship to be held from October 19 to 30. Official tour uniforms and national caps were awarded to the players at a ceremony held at Alba Club in the presence of Cricket Bahrain Association officials, sponsors and parents of the players.

CBA Secretary-General, Yasser Zafar handed over the Caps to the players. On the occasion, he thanked the sponsors Royal Bahrain Hospital, Excelon and Al Namal Group and who have supported the children whole heartedly for this tour.

The children have been going through a rigorous training camp at the Alba Club for the last 4 months under the supervision of national coach Azeem Ul Haque with assistance from Omran Ghani, Tahir Ansari and Prachur Shukla. The Bahrain team is pooled in Group A alongside Saudi Arabia, Kuwait and Iran with the games scheduled on the 21, 23 and 25 of October.

BTC to hold qualifying registration and draw for junior championship