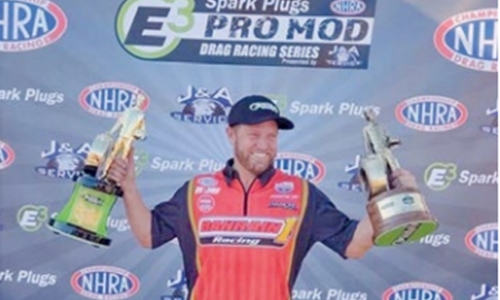 Bahrain1Racing driver Stevie Jackson was crowned World Champion of the 2019 E3 Spark Plugs NHRA Pro Mod Series in the United States of America. Behind the wheel of Bahrain1Racing’s supercharged Camaro, Jackson clinched the title on Monday at the zMAX Dragway in North Carolina after winning his Pro Mod final against fellow-American Steven Whiteley.

Jackson, who is fondly nicknamed “Stevie Fast”, was able to wrap up the championship battle with one round still remaining in the 2019 season. It is his first title in the Pro Mod category of the prestigious National Hot Rod Association (NHRA) series. BIC lauds the efforts of the entire Bahrain1Racing Team, led by HH Shaikh Abdulla, and in particular the determination and skill of Jackson, who has once again proven that he is one of the top drag racers in the world.

BIC Chief Executive Shaikh Salman bin Isa Al Khalifa commented: “I congratulate HH Shaikh Abdulla bin Hamad Al Khalifa on winning the World title and for leading Bahrain1Racing to the highest levels of international motor racing.” “Bahrain1Racing is an inspiration to the drag racing community not only in the Kingdom of Bahrain but also in the entire region, as one of the most competitive outfits globally in the sport.”

“The team’s success would not have been possible without the considerable efforts and dedication of His Highness Shaikh Abdulla. It is also a testament to the vibrant motorsport culture we enjoy in the Kingdom of Bahrain, which has been growing exponentially year after year.” On his title victory, an emotional Jackson was quoted as saying: “This shows that anyone who works hard can be a champion. “This all started in a hospital bed in 2018 after I crashed here [in another race].

HH Shaikh Abdulla said we were going to put together a team to go after the championship and that’s what we’ve done.” Jackson will be back in action for Bahrain1Racing at the 2019 NHRA season finale in Las Vegas at the end of the month.