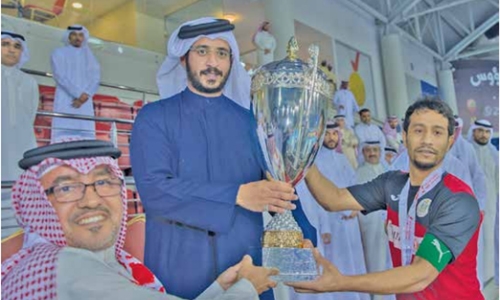 Sar Club triumphed in the National Clubs and Youth Centres Futsal League after defeating Safra Youth Centre 1-0 in the final game, while Tamkeen team bagged the Companies Futsal League title following their hard-earned 5-3 victory over Bahrain Central Bank. HH Shaikh Khalid bin Hamad Al Khalifa has crowned the champions of the events which were held as part of the seventh Khalid bin Hamad Futsal League, organised by the Ministry of Youth and Sports Affairs.

In-Line with the Royal Vision

On this occasion, HH Shaikh Khalid affirmed that the sports and youth sector is witnessing a tangible development thanks to the direct sponsorship and backing extending to it by HM King Hamad bin Isa Al Khalifa, the King of the Kingdom of Bahrain. “Since the first edition of Khalid Futsal League, we have been keen to align its objectives with the Royal vision of HM the King which aims to increase the activities and programmes designed for youth in an effort to grow talents in sports and discovered them as this will positively impact sports in the Kingdom of Bahrain,” HH Shaikh Khalid said.

Organising Sports Competition Programmes HH Shaikh Khalid further added that Khalid bin Hamad Futsal League achieved outstanding successes and reached its seventh edition thanks to the direct follow-up of HH Shaikh Nasser bin Hamad Al Khalifa, Representative of His Majesty the King for Charity Works and Youth Affairs and President of the Supreme Council who is always keen to organise sports competitions in order to develop this important field in Bahrain.

“We have been keen to launch various sports initiatives and support programmes that contribute to developing the potentials and capabilities of young Bahrainis. Whoever is following Khalid bin Hamad Futsal League fully understands the amount of development it has witnessed since it was introduced. It managed to take the sports careers of many young Bahrainis to the next level and at the same time many talented futsal players were discovered,” HH Shaikh Khalid pointed out.

Furthermore, H H Shaikh Khalid praised the efforts of the Ministry of Youth and Sports Affairs under the leadership of Aymen bin Tawfeeq Al Moayed in making the seventh edition a huge success. He also hailed the performances showcased throughout the event. It’s worth citing that 52 teams participated in the 7th Khalid bin Hamad Futsal League, while 728 players from both genders featured in the event.