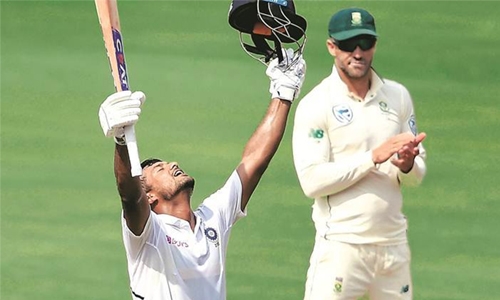 India declared their first innings on 502 for seven bolstered by a double century from Mayank Agarwal on the second day of the opening Test against South Africa yesterday. Agarwal made 215 to put South Africa’s bowling attack on the ropes in Visakhapatnam. The 28-year-old put on a record 317-run opening stand with Rohit Sharma to set the tone for India’s dominance at the start of the three-match series.

Agarwal smashed six sixes and 23 fours in a 371-ball knock in just his fifth Test. He fell to part-time spinner Dean Elgar in the afternoon session and departed with handshakes from the South African players. Ravindra Jadeja, 30 not out, and wicketkeeper-batsman Wriddhiman Saha, 21, played useful cameos before India declared in the final session. Sharma fell for 176, stumped off Keshav Maharaj before lunch, and India then lost two cheap wickets.

Agarwal kept up the attack until his departure to pile pressure on the South African bowlers in an extended afternoon session to make up for time lost to a thunderstorm on Wednesday. Maharaj took three wickets from his 55 overs of left-arm spin.