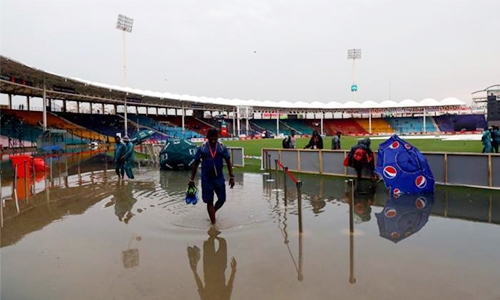 The 10-year wait for ODI cricket continues for Karachi after the first one-day international between Pakistan and Sri Lanka was called off without any play yesterday. An unusual spell of monsoon rain in the southern port city during this time of the year left the cricket ground completely waterlogged.

Umpires called off the match at 4:30 PM local time with no chance of any play. The second match of the ODI series between Pakistan and Sri Lanka has been rescheduled for Monday instead of Sunday as a result of the ongoing weather condition in Karachi. The decision was taken mutually by the Pakistan Cricket Board (PCB) and Sri Lanka Cricket (SLC) after the opening match of the series was called off without a ball being bow led.

The rescheduling would make sure that the downpour does not affect any more matches of the series, and also allow the ground staff ample time to prepare the National Stadium Karachi (NSK) outfield for the next fixture. Karachi hasn’t hosted an ODI in 10 years since Sri Lanka last played here in 2009.

It is the first time since Sri Lanka’s team bus was attacked in Lahore in 2009 that a foreign team will conduct a two-week tour of Pakistan with Karachi hosting all three ODIs. Major teams have avoided Pakistan since that ambush, which killed eight people and injured several players. The ODI series will be followed by three Twenty20s at Lahore.