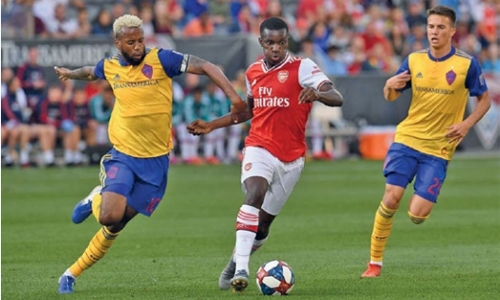 Arsenal open US tour with win

Brazilian Gabriel Martinelli scored in his Arsenal debut Monday as the English Premier League club launched their pre-season tour of the United States with a 3-0 friendly win over the Colorado Rapids. Bukayo Saka and James Olayinka also scored for the Gunners, who cruised to the victory at Dick’s Sporting Goods Park in suburban Denver.

Martinelli, the 18-year-old forward signed from Ituano on July 2, was given a surprise start in attack by Unai Emery and sent an early chance wide. Saka, 17, was an energetic presence and put Arsenal up 1-0 in the 13th minute as he collected a through-ball from Eddie Nketiah. Another teenager -- 18-yearold Olayinka -- doubled the score in the 29th, seizing a stray pass from defence and racing in to fire into the top left corner of the net. Martinelli, having missed his early chance, capped the scoring in the 61st when he slotted home a cross from close range.

The Rapids, in the midst of the Major League Soccer season, fielded a mostly reserve side that featured several players from the lower-rung Colorado Springs Switchbacks. Arsenal, too, started a reserve team as they begin their build up to the Premier League season after again failing to secure a Champions League berth. The tour hasn’t started without controversy. Captain Laurent Koscielny refused to travel to the US, and a group of influential Arsenal supporters’ organisations published a statement on Monday hitting out at Stan Kroenke’s “passive ownership”.

Under a hashtag “WeCareDo You” the statement decried a “soulless” atmosphere at Arsenal’s Emirates Stadium and a lack of transfer strategy. Kroenke, who began investing in the club in 2007 through his company Kroenke Sports Enterprises and took full ownership in 2018, also owns the Rapids as well as the NFL’s Los Angeles Rams.

Bahrain’s fans to enjoy packed schedule of FIVB U21 Worlds