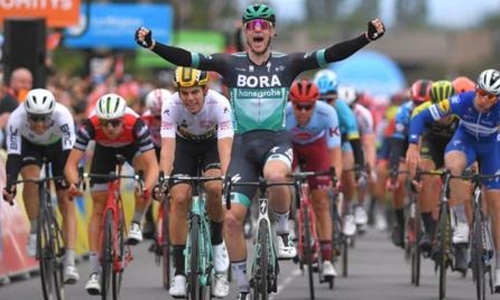 Sam Bennett of Bora-Hansgrohe claimed a dominant sprint victory on stage 3 of Criterium du Dauphine in Riom. The Irishman was led out expertly by Shane Archbold and then delivered a powerful acceleration to claim honours ahead of Wout van Aert (Jumbo-Visma).

Davide Ballerini (Astana) took third place ahead of Clement Venturini (AG2R La Mondiale), while Edward Theuns (Trek-Segafredo) came home in fifth. The win was Bennett’s seventh at WorldTour level this season, though he missed out on selection for the Giro d’Italia to Pascal Ackerman, while Peter Sagan is expected to be Bora-Hansgrohe’s sprinter at next month’s Tour de France.

Stage 3 of the Dauphiné was animated by a day-long breakaway from Natnael Berhane (Cofidis) and Quentin Pacher (Vital Concept). The pair escaped shortly after the start in Le Puy-en-Velay and built up a maximum lead of 3:45 before they were pegged back by the sprinters’ teams on the run-in to the finish.