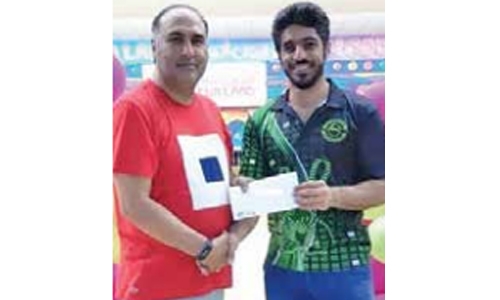 Ali Abdulla scored the daily high series amongst Group B bowlers late Sunday night as qualifying continued in The Godfathers Tournament, currently taking place at Funland Centre. The event is being held in memory of the late Murtadha Qudrat Rasti and the late Shaikh Ebrahim bin Mohammed Al Khalifa. Abdulla played a series of 667 to register his best of the competition so far. He however has yet to play a third trial and has just one other score of 598, earning him a 140.6 average from a 1,265 total.

His scores were enough to place him in 21st position on the qualification standings of Group B, which is for intermediate bowlers. Essa Taqi held on to first place with a 218.4 average and 1,966 total, while Abdulrahman Alali was second on counts of 216.1 and 1,945. Patrick Toney of the USA was third on a 208.8 average and 1,879 aggregate. Tin-Tin Cru, Mustafa Qaed and Isa Khaled were fourth through sixth, respectively.

Meanwhile, Dante Tisdom and Ali Mahmoud maintained their top form. Tisdom played a high series of 682 amongst the elite bowlers in Group A on Sunday, while Mahmoud had the best score of 581 amongst the beginners in Group C. Tisdom’s outing was his second-best of the tournament and it helped raise his average to 231.3 with a 2,082 total. He strengthened his position in first place, ahead of Emerson Gotencio who owns a 222.7 average and 2,004 total score. Emad Jahromi ranked third with a 210.2 average and 1,892 total. JM Villanueva, Ahmed Almalki and Fawaz Abdulla completed the top six.

In Group C, Mahmoud’s score was his best of the tournament thus far, adding to his other top series of 550 and 469. He now boasts an average of 177.8 and a 1,600 total, which put him in second place. Mohammed Mahmoud stayed as the leader with a 210.6 average and 1,895 total, whereas Layla Janahi was classified third with a 170.6 average and 1,535 total. Ahmed Al Ansari was fourth, Mariam Modara fifth and Luigi Magpantay sixth.

The qualification round continues each night at Funland until May 29. At the end of this stage, the first and second from each group advance directly to Round Three, while those ranked third through 12th move on to Round Two. These stages will be played on May 30 and 31, along with the ensuing Step-ladder Final round.