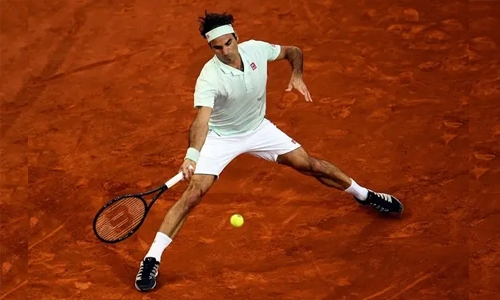 Roger Federer survived two match points against French maverick Gael Monfils to extend his claycourt comeback and reach the quarter-finals of the Madrid Open yesterday. The evergreen Swiss 37-yearold did not drop a game in a dominant first set but was dragged into an intense battle by an inspired Monfils before prevailing 6-0 4-6 7-6(3). World number three Federer, playing his first tournament on clay for three years as he prepares for the French Open, surrendered the initiative after his brisk start and was in deep trouble in the third set when he trailed 4-1.

Federer struggled with his timing on occasions in breezy, sunny conditions and swatted a ball angrily over the stands when he dropped serve at the start of the decider. But he broke back in the seventh game with a stunning sliced backhand return. Monfils earned a match point at 5-6 on the Federer serve with an ice-cool backhand pass, but Federer followed in a second serve and bounced away a smash. Federer saved another match point to set up a tiebreak and he proved unstoppable as he swept to his 1,200th match win.

Austrian Dominic Thiem awaits in the next round after he beat Italian Fabio Fognini. Meanwhile, Novak Djokovic defeated Jeremy Chardy 6-1, 7-6 (7/2) to extend his domination of French opponents. The Serb top seed needed less than 90 minutes to reach the quarter-finals at the Caja Magica, beating Chardy for the 13th time in as many attempts. Djokovic holds an overwhelming record against the French, standing 66-2 against them since leading Serbia to the 2010 Davis Cup title over France. Djokovic, the Madrid champion in 2011 and 2016, is searching for his top clay form as he begins the chase a fourth straight Grand Slam title when Roland Garros starts in little over two weeks.

He secured the opening set in less than half an hour, but was forced to a tiebreaker as Chardy’s resistance stiffened in the second. He will face ninth seed Marin Cilic next after the Croatian put out Laslo Djere 4-6, 6-3, 6-2, winning 11 of the last 13 games. Two-time women’s champion Simona Halep overcame Ashleigh Barty 7-5, 7-5 to reach her fourth Madrid semi-final. Romania’s third seed and former world number one will next play the winner from top seed Naomi Osaka and in-form Swiss Belinda Bencic.

Mick Schumacher appreciating more and more what Michael did