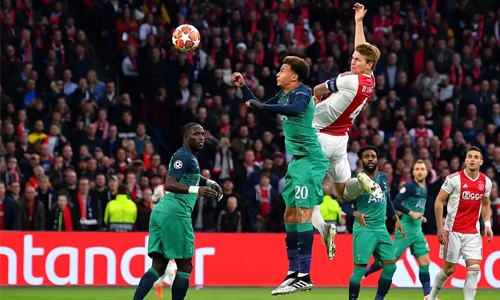 Ajax coach Erik ten Hag expressed pride in his team after seeing their rousing Champions League run come to an end in cruel fashion in their semi-final against Tottenham Hotspur on Wednesday. “I’m very proud of this team and that they made it this far.

We have had a great run,” Ten Hag said after the Dutch club were beaten on away goals on a dramatic night at the Johan Cruyff Arena. Ajax had been 2-0 up on the night, and 3-0 ahead in the tie, after first-half goals by captain Matthijs de Ligt and Hakim Ziyech.

Having eliminated Real Madrid and Juventus in the previous two rounds, they were on the brink of a first Champions League final appearance for the club in 23 years and their players slumped to the turf in despair when Lucas got the winner. “We tried to shut the game down and we didn’t manage,” admitted Ten Hag, with Ziyech also hitting the post late on for the home side. “I told the players it is very hard to find the right words in a moment like this and that football is cruel.