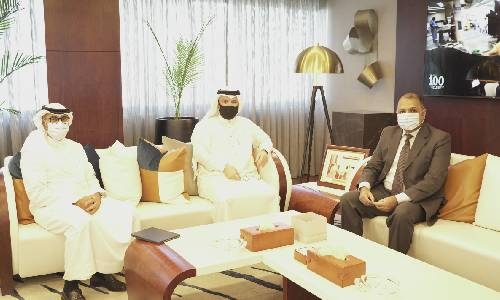 The depth of economic ties between Bahrain and Pakistan and opportunities in various sectors were on focus during a meeting between the Bahrain chamber and top Pakistan officials.

He previewed existing development projects in Bahrain and their contribution to the national economy, citing the under-construction Bahrain International Exhibition and Convention Centre in Sakhir as an example.

He also touched upon the non-oil trade volume between Bahrain and Pakistan, which stood at 120.3 million US dollars in 2020, affirming that many opportunities remain untapped and vowed to exert all efforts to achieve a mutually beneficial economic partnership.

For his part, Hasnain Yousaf voiced pride in the 50-year friendship between Bahrain and Pakistan.

He shed light on development projects in his country and underlined business opportunities in food security and tourism.

He also spoke about notable Bahraini investments in Pakistan, particularly in the Islamic banking field, and the potential to reinvigorate trade and investments and augment economic ties.