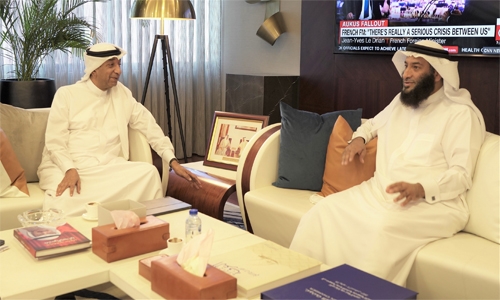 The decision by the Government of Bahrain to integrate the Bahrain Chamber in economic decisions represents a “true manifestation of public-private partnership,” said Sameer Nass.

This would help “secure more gains for the people and the country,” Nass told MP Ali Zayed, the Second Deputy Speaker of the Parliament, during a meeting at his office.

The Chairman discussed with Ali Zayed the outcomes of the chamber’s recent visit to the Russian Federation and efforts to strengthen business ties with brotherly and friendly countries.

Nass also threw light on the efforts in liaising local business owners and investors with their international counterparts, attracting foreign investments that add value to the national economy and create jobs, and promoting the Kingdom of Bahrain internationally.

The meeting also underlined the economic potentials of Bahrain and the importance of empowering the youth and fostering a culture of entrepreneurship to spur economic development and reinforce diversification.

MP Ali Zayed praised the comprehensive economic studies presented by the chamber, which, he said, “contributed to overcoming challenges and enhancing the vigour of the national economy.”