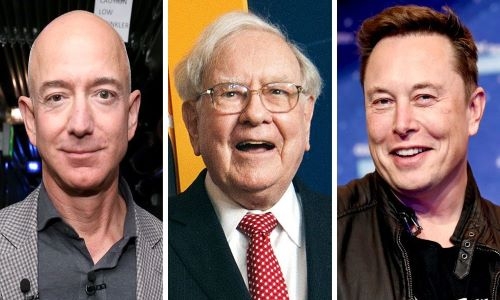 Several of the richest Americans have paid zero income tax in some years, according to an investigative report published Tuesday that comes as Washington weighs new proposals to address tax avoidance by the wealthiest individuals and companies.

The bombshell report, by New York-based journalism nonprofit ProPublica, showed Amazon Chairman Jeff Bezos paid no income tax in 2007 and 2011, while Tesla chief Elon Musk avoided all payments in 2018. Some of the richest Americans “pay little in income tax compared to their massive wealth -- sometimes, even nothing,” said ProPublica, which did not disclose how it obtained the confidential tax data.

Others who paid nothing to the Internal Revenue Service in some years included news industry billionaire and former New York City mayor Michael Bloomberg, activist investor billionaire Carl Icahn, and philanthropist and financial giant George Soros. ProPublica says the billionaires did nothing illegal in their tax declarations but employed tax-avoidance strategies “beyond the reach of ordinary people.”

They also benefited from the way taxable income is defined in the US tax code, since it does not take into account the growing value of assets like stock and property, and only taxes proceeds from sales of those items. The report comes days after G7 finance ministers endorsed a global minimum corporate tax rate of at least 15 per cent, one of several tax proposals aimed at ensuring profitable multinationals pay their fair share. Other efforts include Democratic Senator Elizabeth Warren’s initiative to tax the super-wealthy, including the value of their stock holdings and homes, rather than focusing on income alone.

“Our tax system is rigged for billionaires who don’t make their fortunes through income as working families do,” Warren said as she published the ProPublica article on Twitter. “It is time for a #WealthTax in America to make the ultra-rich finally pay their fair share.” Demolishing the myth ProPublica’s report is based on IRS tax returns of extremely wealthy people over more than 15 years.

“Taken together, it demolishes the cornerstone myth of the American tax system: that everyone pays their fair share and the richest Americans pay the most,” the article said.

The Treasury Department and other authorities are investigating the release of the tax returns.

“The unauthorised disclosure of confidential government information is illegal,” Treasury spokeswoman Lily Adams told AFP. The issue has been referred to the Treasury’s inspector general, as well as the FBI and federal prosecutors in Washington, “all of whom have independent authority to investigate.” Bezos in 2011 reported that his investment losses exceeded his income, meaning he could report a loss for the year.

He also received a $4,000 tax credit for his children that year, according to the report. Queries to staff for Bezos, Musk, Bloomberg, Icahn and Soros did not garner an immediate comment.

A spokesman for Soros told ProPublica that Soros did not owe taxes between 2016 and 2018 because his investments lost money, however, he supports higher taxes for the wealthy -- something he has spoken about publicly.

Bloomberg and Icahn told the publication they had paid all taxes they owed. ProPublica found that the rich pay far below the official 37 % rate on the highest incomes if their taxes are compared to how much Forbes magazine reports their wealth has increased in a given year. What ProPublica calls the “true tax rate” means that Buffett, for example, paid only 0.1% in taxes between 2014 and 2018.