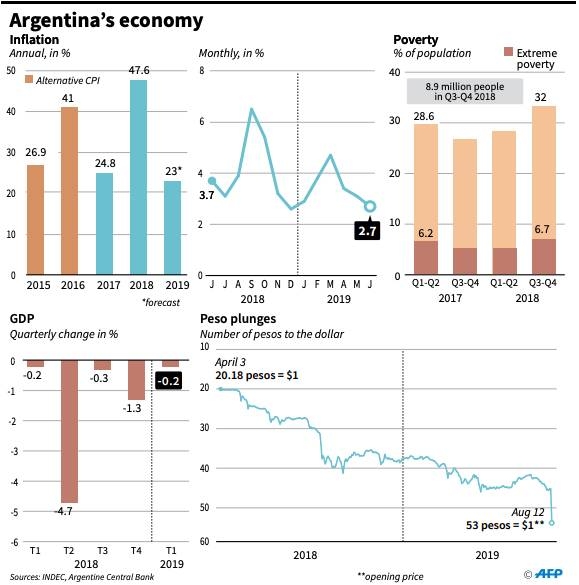 Argentina’s peso ended a tumultuous week Friday having shed 20 percent in its value against the US dollar as both Fitch and S&P cut the South American country’s long-term credit rating, citing increased uncertainty and a rising risk of default.

The peso gained 2.75pc to trade at 58.12 to the dollar on Friday, after several days of freefall were halted Thursday following a joint appeal for calm by President Mauricio Macri and his center-left rival Alberto Fernandez.

But the outlook remains uncertain after markets went into turmoil following Macri’s crushing defeat by the populist Fernandez in nationwide primary polls on Sunday. “The Argentine peso has stabilized over the past few trading days but the collapse earlier this week has made a sovereign debt default highly likely,” said analysts Capital Economics in a note.

Rating agency Fitch downgraded the crisis-hit government’s credit rating two notches to “CCC” from “B.” Standard & Poor’s dropped it a single grade from “B” to “B-.” “The pronounced turbulence of the financial market, with significant depreciation of the Argentine peso and a rise in interest rates... has significantly weakened the already vulnerable financial profile,” added S&P.

“The downgrade of Argentina’s ratings reflects elevated policy uncertainty... a severe tightening of financing conditions and an expected deterioration in the macroeconomic environment that increase the likelihood of a sovereign default or restructuring of some kind,” Fitch said in its announcement.