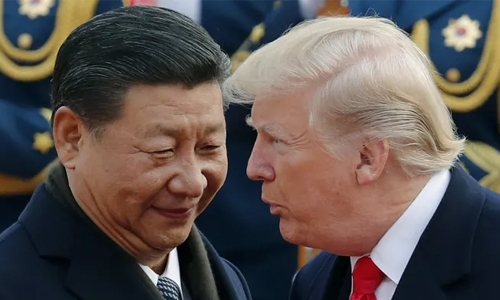 The US- China trade war escalated Monday as Beijing announced it would raise painful tariffs on $60 billion in US exports by next month, responding in kind to President Donald Trump’s decision last week to hike duties on hundreds of billions of dollars in Chinese merchandise. While American officials argue that they have the upper hand in the year-long clash, China struck back amid reports it could raise the temperature even higher by boycotting US agriculture, dumping American debt and cutting orders for Boeing aircraft.

However, US President Donald Trump left open the door for reconciliation, saying he expected a “fruitful” meeting next month with his Chinese counterpart Xi Jinping at a Group of 20 summit in Japan. Trump has meanwhile also ordered the start of a process to impose new duties on about $325 billion worth of additional Chinese merchandise. But he said Monday in Washington he had not decided whether he would ultimately impose those levies.

The increase in duty rates that Beijing announced Monday targets a range of American agricultural and manufactured goods, kicking levies up as high as 25 percent, according to a statement by the Tariff Policy Commission of the State Council -- China’s cabinet. Despite the retaliation, Beijing also appeared to give time to find a resolution by setting the June 1 date for those increases to take effect. “China’s adjustment of tariff-adding measures is a response to US unilateralism and trade protectionism,” the statement said, adding that it hoped the US would work with China towards a “win-win agreement.”

The announcement sent Wall Street stocks plunging, with the tech-rich Nasdaq having its worst day of 2019 and the benchmark Dow Jones Industrial Average closing at its lowest level since February 11. But in a news conference, Trump was buoyant, telling reporters that his decision to increase tariffs was “a very positive step.”